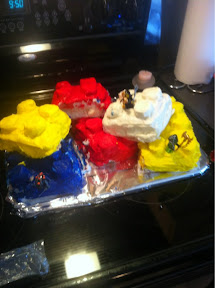 This was my first cake.
I decided against my better judgement and went with the recipe online.
“This will be much faster” I thought.. *groan*

I should have known there was a problem off the bat when I ran out of frosting halfway thru the crumb coat.
Two large containers and I was out.

It was messy working with the store bought icing but it seemed to be setting properly.
Key word.
Seemed.

I waited almost an hour waiting for my hubby to bring me more frosting before I could mix the colors and get started.

I was rushing to get to the movies so it wasn’t pretty but it was done. The marshmallows were tricky to cover but they stuck like glue when I added them to the cake. I wished I had owned a spray gun to finish my cake.
But I don’t So the marshmallows looked rough. *sigh*
My oldest helped me ice the cakes. She was busy “doing arts and crafts” while I tried to smooth out runny icing.

I noticed when we got back from the movies the icing was still “soggy”and hasn’t started setting.
I left the cake sit over night on the counter and started assembling the cake this morning.

Lesson#2: parchment paper works 100% better than wax paper and the cake won’t get soggy under neath.

The icing hasn’t set over night.
Moving the pieces was tricky then the unthinkable happened.

The second layer slid off taking the first taking out the marshmallows “pegs”with it.
Of course I reacted and reached under the sliding red mess and attempted to put it back in place and it started to crumble in between my fingers.
Staining my hands a beautiful shade if red.

The first if two “stomp my feet and whine” hissy fits.

Lesson#3: wear plastic gloves when working with colored icing.
Even bleach won’t get the “no taste red” out.

I quit.
Seriously quit.
Time was running out and I needed a cake so I hopped in the van and raced to the store.

Thank you “cake fairy” who saved my butt this morning. This was the second cake and there are actually two more bricks still untouched.

We ate like kings and are drowning in frosting. 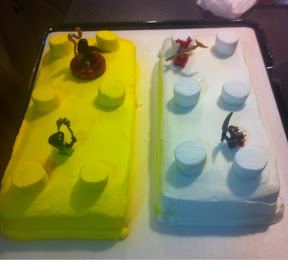 I think they are totally cute.

But they aren’t mine.

When I got back from the bakery I moved my monstrosity of a cake to the garage.

It’s not heated so it will freezer.

And of course as I was moving the cake to the garage a blue marshmallow fell off the cake my my six year old stepped In it.
Blue icing ground into the hardwood.
Fabulous!!
{my second hissy fit followed}

The party?
Well add 10 little boys between the ages of 7&8.
Throw in the avengers movie and cake. Lots of cake and pop and did I mention loud boys?

I have scrubbed my white carpets three times.

1. A hot dog rolled off of giggles plate and splattered on the living room floor.

2. The baby who I thought was happily eating the baby tomatoes wasn’t. she was busy grinding it into the white carpet.

3. Two underage “wrestlers” tossing {as in pick up and throw} each other around.
Boy #1 throws Boy #2 onto the couch and he hits boy #3’s head resulting in boy#2 nose busting open gushing all over my floor.

So tomorrow looks like it will be filled with vaccumning & laundry along with scrubbing the floors and grocery shopping.

Maybe to ward off hissy fit number 3 I should pull on my Jammie’s and crawl into bed!
Besides no one likes a cranky mommy.
Right?

– Sweet Momma on the run