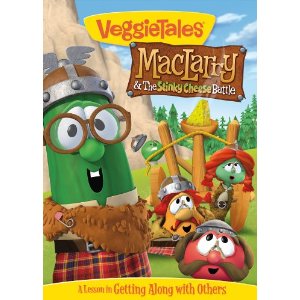 Veggies tales has another new title coming out just in time for back to school!
Their newest film “MacLarry & the Stinky Cheese Battle” was just released to all of my American friends but, amazon.ca is claiming a Canadian release date for early September.
Either way you can order your own copy here.
Here is the synopsis of the movie:

Larry the Cucumber stars as MacLarry – a misfit inventor who is stuck in the middle of the silliest battle ever between two tribes of perpetual pranksters!  When the biggest prank of the century is unleashed, the feuding tribes are in danger of being overcome by the stinkiest cheese in the land!  Will MacLarry realize that his God-given talents may be just what is needed to save them all from the loathsome Limburger??

If you are as anxious I was to see the movie you will want to check out the trailer.
It’s pretty funny too!

I received a copy of this movie in order to facilitate my review.
The opinions in this post were my own and were not influenced by any other parties.

Recently Veggie tales sent me an advance DVD copy of “Maclarry” to watch with my family for  Summer Family Movie night.  We put on our pajamas ordered a large cheese pizza then we all snuggled under the blankets on the couch.
Now don’t act surprised.
How can you watch a movie about stinky cheese and not eat any cheese?
Exactly….
The movie is short.
Only 45 minutes so it’s a great before bed movie.

There are no scary scenes, lots of great songs and lots of laughs along the way.
With a 6 year old and an 8 year old this movie is excellent cconversation starter regarding how to “get along” (perfect with younger siblings)

Here’s what the kids thought of the movie:

Niffy nunu: hadn’t seen or watched a Veggie tale movie in a few years {she’s 18} but when I asked her what she thought she shared that she liked it and thought it was cute.
I heard her snicker when Querty kicked in.  We were both surprised to see an updated Querty!

Mr.D: He thought it was awesome!!  He is really into inventing and creating  right now so there were quite a few scenes that peaked his interest.  As soon as the movie was over he wanted me to put it back on.

Giggles: When I asked her what she thought she told me that she learned that “God made her special” and that “teasing is mean.”

Punky: May be a little young for the “getting along with other” message since she is only 2 but she has been repeating “Eww..stinky cheese!”ever since the movie ended.
Thankfully we can watch it over and over again so I know whens shes ready the message will sink in.

Here’s what I thought of the movie:

I love how each Veggie Tales movie teaches Christian values in a fun creative way that captures children imaginations and adults alike. Catchy music and great one liners make this movie family friendly for all ages.
MacLarry includes lots of positive messages about fitting in and the value of individual talents and abilities.
I really enjoyed the reminder at the end of the film that we all have something to give that brings us all together.
Our household have been big veggie tale fans over the years and I have to admit I have two personal favorite veggie tale songs.  This one and this one.
I wonder which silly song is going to stick with me from MacLarry & the Stinky Cheese Battle.

Plus this movie came “just in time”.  With only 4 weeks left before school resumes I think we all need a refresher course on “getting along with others”.

The DVD prompts you to check out the veggie tales website as they have launched a fun new stinky cheese game and there are other free activity and snack ideas to go along with the movie.
This one would be so much fun if it wasn’t rainy and stormy out: 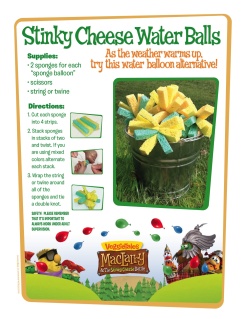 Family movie night was a success and everyone had a wonderful time.

Can’t wait to curl up and watch this movie again… 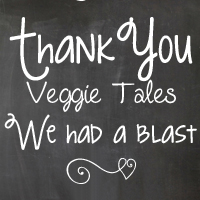